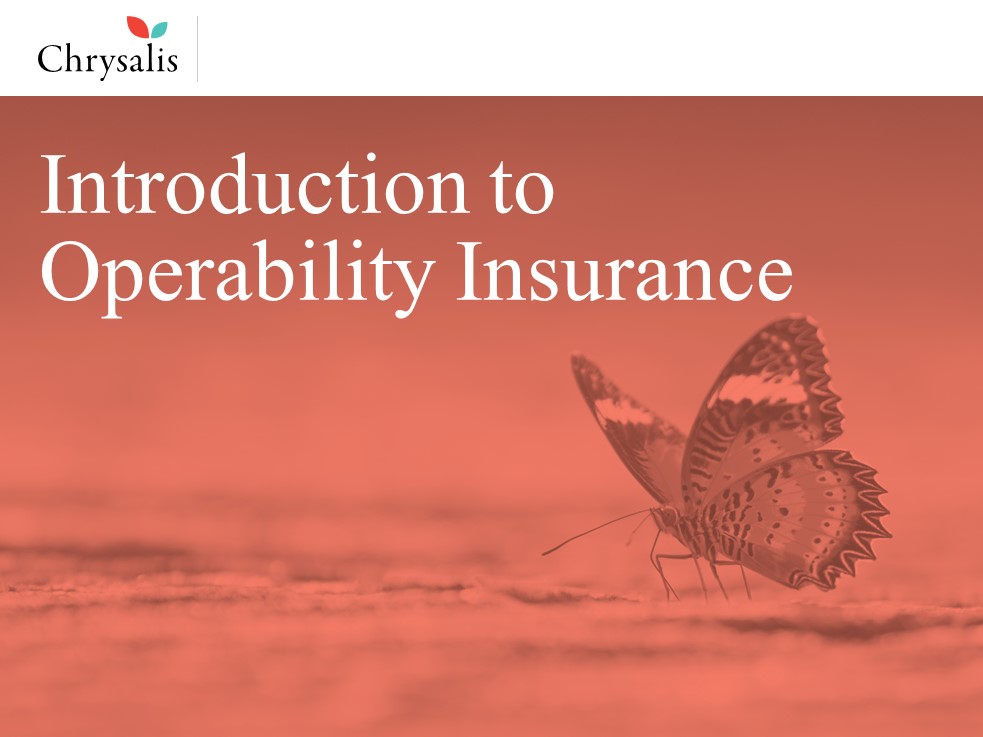 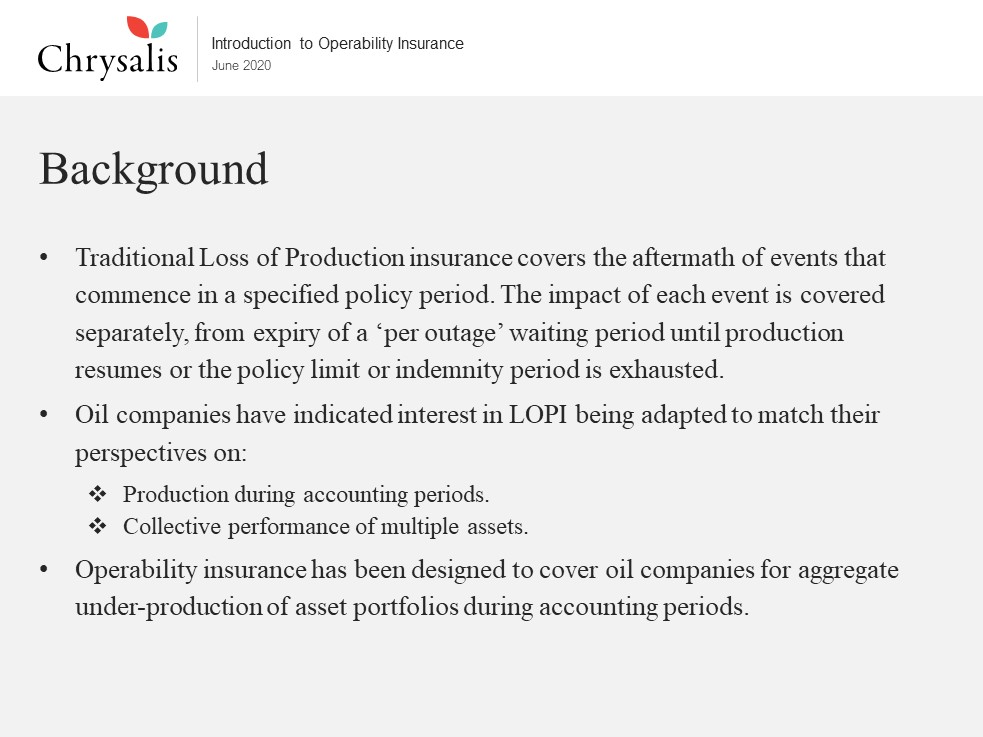 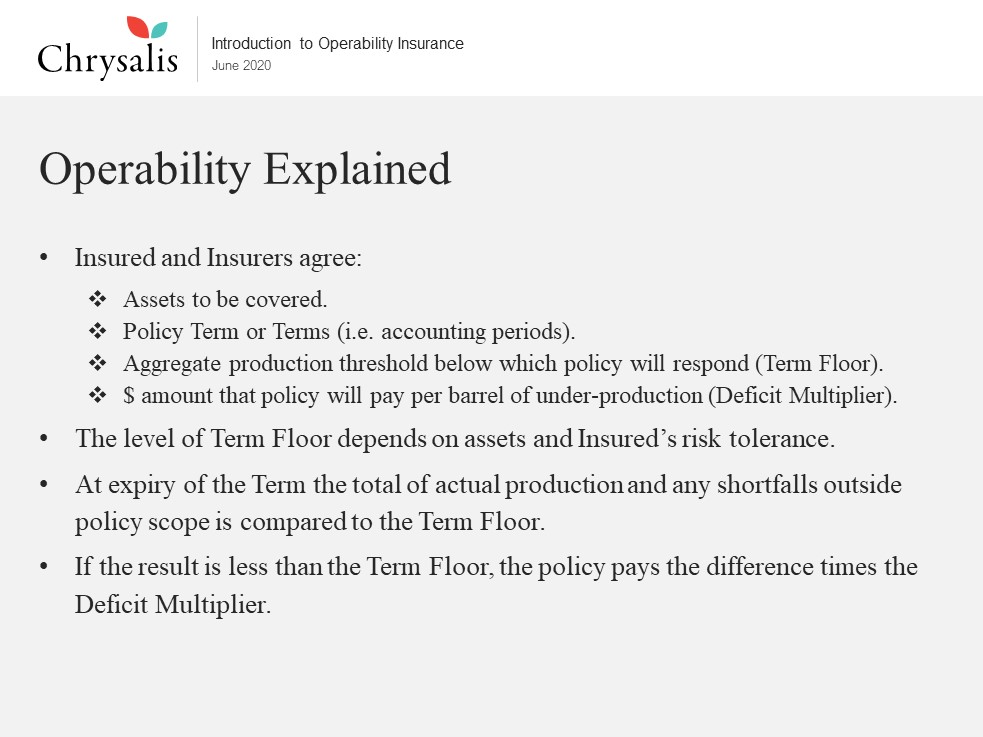 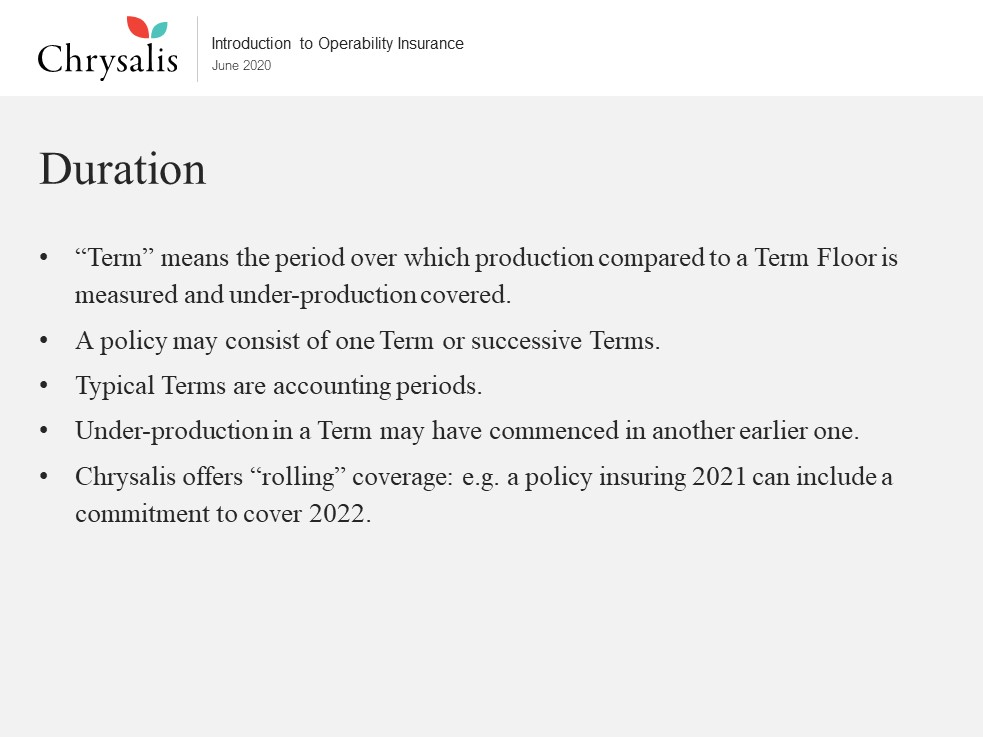 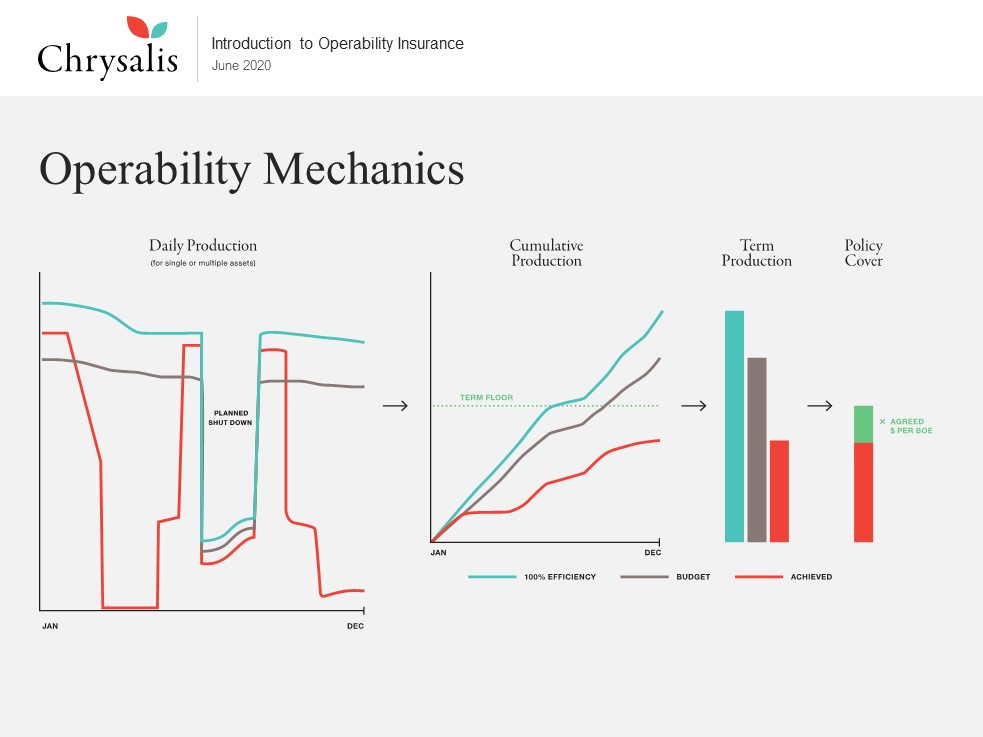 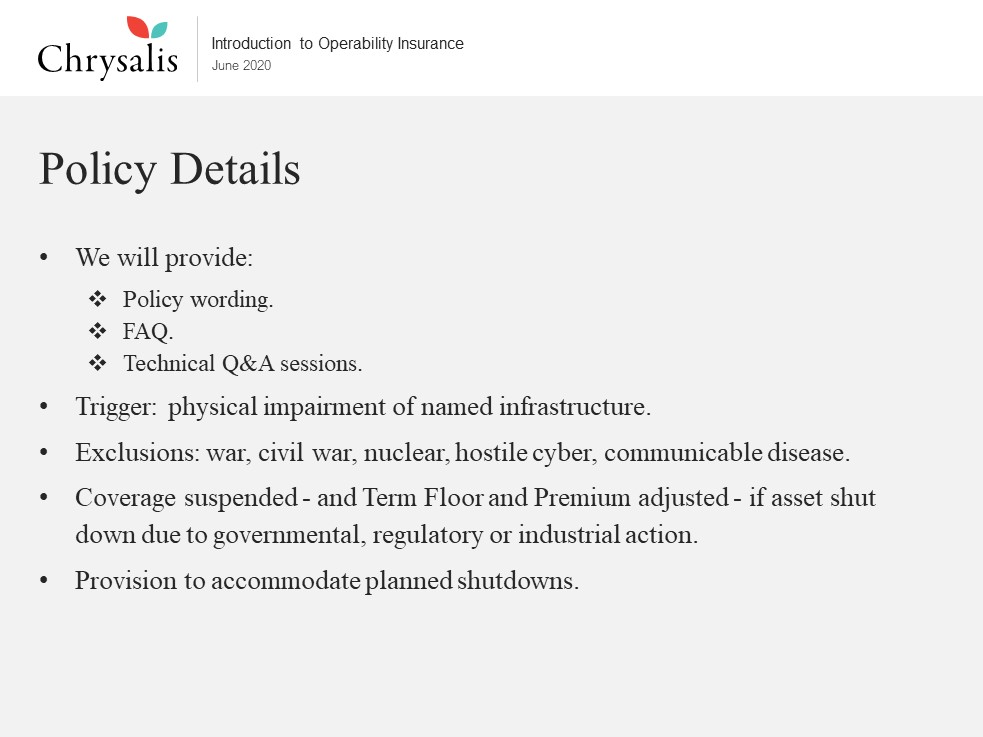 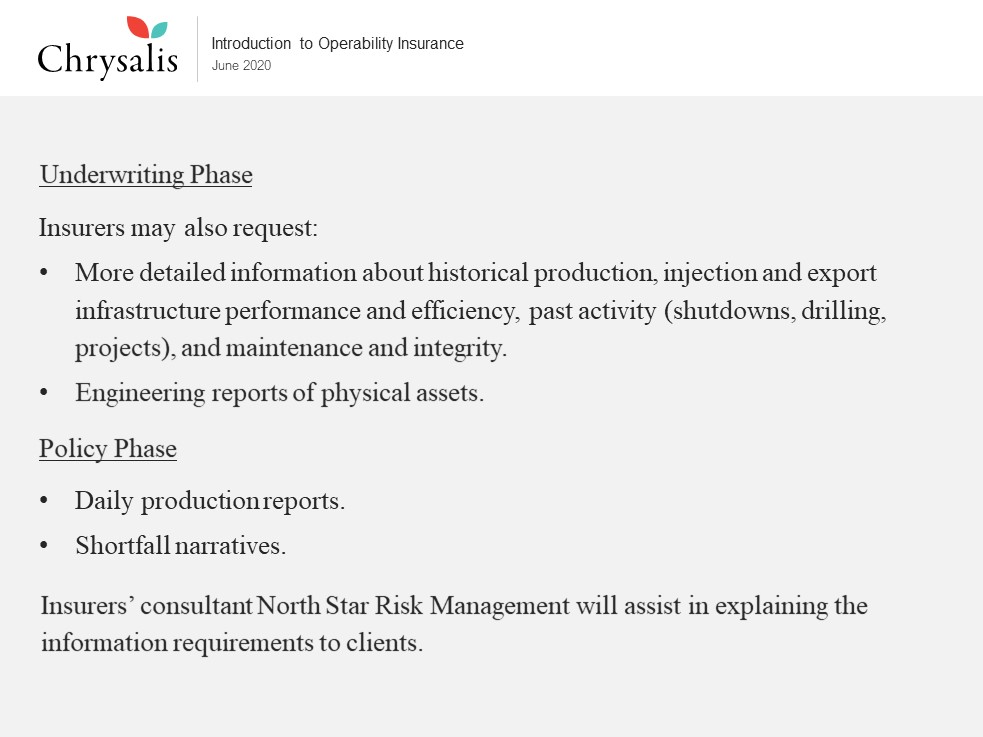 1. What is Operability Insurance?

Operability is coverage for aggregate under-production of hydrocarbons during an agreed term due to impaired operability of production infrastructure.

2. What production can be insured?

3. How is it different from Business Interruption?

4. The policy is called Primary Operability. Is there an Excess?

5. Can an Insured buy Operability and traditional Business Interruption (BI) together?

Yes, oil companies can use traditional BI insurance instead of Excess Operability, either giving BI/LOPI benefit of recoveries under Operability or conversely Operability benefit of the BI/LOPI policy.

6. What is the available capacity?

7. How is loss measured?

Loss is measured by comparing the achieved production during a Term with an agreed aggregate production threshold called Term Floor. If actual production is less, the policy pays the difference times an agreed monetary amount.

8. How is the Term Floor determined?

The level of Term Floor is agreed policy by policy. Main determinants are the oil company’s assets and risk tolerance: greater risk tolerance allows the ideal Term Floor to be lower relative to “100% efficiency” production.

There are certain kinds of production shortfall that Operability does not cover. The policy adds these uncovered shortfalls to achieved production and compares the combination to the Term Floor.

10. What shortfalls are not covered?

11. Does this mean that subject to exclusions and except in cases of misrepresentation, non-disclosure or due diligence failure, everything is covered?

The Insured must first point to impairment of the infrastructure and show that this is the cause of the shortfall (subject to “Unseen Cause Buffer” – see Q14). Examples of causes outside of standard policy scope are weather, regulatory action, reservoir behaviour, industrial action and licensee insolvency.

12. Is there is a buy-back option to include perils outside of the standard policy scope?

Other perils can be considered case by case and added to a Supplementary Explanations Endorsement.

13. How are uncovered shortfalls quantified?

14. It may be time-consuming to show cause for small production shortfalls. Is there a “de minimis” provision?

Duration is subject to negotiation. “Term” is the policy expression for a period during which aggregate under-production compared to Term Floor is insured. A policy may cover a single Term or successive Terms each having a distinct Term Floor. Typical Terms would be accounting periods.

16. What happens if an Insured gets caught out before it has arranged renewal by an incident likely to cause under-production after policy expiry?

Chrysalis offers a rolling policy that initially covers two Terms and adds a new Term as each one expires. Alternatively, in cases when an Insured takes a single Term it can purchase an option to add a so-called “Optional Term” that will only take effect at expiry of the Standard Term if a loss is in progress.

17. What happens when an asset has a planned shutdown?

The oil company’s production estimates will reflect estimated “non-production” during the planned shutdown. To avoid such “non-production” being treated by the policy as uncovered shortfall the Insured is expected to declare the shutdown and its estimated duration (“Declared Shutdown Days”). The asset’s performance will not be counted by the policy from when the shutdown starts until all the Declared Shutdown days have elapsed. During this time Par Daily Production is reduced to zero and any actual production will not be included in the calculation of achieved production versus Term Floor.

18. How does the policy compensate for an oil company experiencing uncovered shortfalls while it continues to pay for the insurance?

Terms may be suspended to remove uncovered shortfalls from calculation of loss. There are two kinds of suspension:

If there is an Automatic Time-out the Term Floor and Premium will be reduced, shrinking the policy. To reflect Discretionary Time-outs the Term expiry date will be extended (e.g. a Term of 365 days suspended after 100 days will resume with 265 days remaining).

19. How is Operability priced?

The mean and distribution of expected production and “as if insured” loss is estimated based on the physical attributes, quality and spread of the assets, their production histories, data for comparable risk parameters, other factors relevant to production output and outages, and the proposed policy parameters. Administration, transaction and capital costs and underwriting margin are then added to arrive at the Premium.

Estimated monthly production per field during the proposed Term:

During the policy: Daily production reports and shortfall narratives.